Good morn’ or evening, friends.  Welcome to the latest installment of Order is Everything.  This is a how-to-guide for music lovers looking to invest in the catalogs of prolific artists.

These articles will instruct – better yet suggest – the would-be consumer on not only which albums to buy, but also in which order to collect them.  You might think to buy them in chronological order, but for a great artist with 10 or more albums, there’s a science to collecting the records.  First of all, not every record is essential to own; secondly, the first purchase is crucial to the listening experience of the consumer.

The first album you buy must be a microcosm of their entire career, and/or, at the very least, must be equally creative and accessible.  Basically, if you like the first CD you buy, the very next one in line is an expansion of what you’ve heard, making it more likely that you’ll purchase it.  As you go on, you’ll develop a genuine admiration of the artists’ music.  Our next artist is John Coltrane.

Revered by almost all who have heard his work, John William Coltrane is the most famous, beguiling and respected saxophonists of all time. ‘Trane made a name for himself playing with Miles Davis, making unparalleled history together with records like Kind of Blue, ‘Round About Midnight and Someday My Prince Will Come.

He also aligned himself with Thelonious Monk to make for short-lived but legendary pairing. Soon enough, Coltrane went from sideman to leader in 1957 with Prestige Records and 1960, he never looked back. From then until his death in 1967 at age 40, John Coltrane set the bar high for musicians and composers, all while challenging the boundaries and tenants of jazz, and himself.

He used his gift as a way to profess his love, exercise his demons, extract rage from his listeners, encourage spirituality and uplift all within earshot of his horn. His influence in music is so severe that it’s nearly impossible not to cross reference him and his work when mentioning any other saxophonist, tenor or otherwise. Many have tried to concur his complex sense of harmonics and technique, but when you really get down to it, Coltrane was a blues player who changed music forever.

Although there are well over 50 releases of his work, there were 24 official albums, studio and live, of John Coltrane as a leader. Of those, 10 albums are essential to own for all music lovers. Here they are, and this is the order in which to acquire them

If you’re going to own one Coltrane album, then this has to be the one. Then again, after one listen, you won’t be able to stop at just one. Featuring heavy hitters like bassist Paul Chambers and drummer Jimmy Cobb, this is a perfect place to begin your Coltrane collection. His first album of all his own compositions, Giant Steps is the prototype for what was dubbed as his “sheets of sound;” ultra-melodic, feverish soloing and vastly expressive. Nearly every song can be considered a standard, but none more so than its game-changing title track and the ubiquitous ballad, “Naima.”

Now that you’ve indulged in the vibrant “sheets of sound” that was Giant Steps, prepare yourself for another collection of life altering music. This album was Coltrane’s first and only release on Blue Note Records, and he surely made the most of it. The title track only is worth the price, while “Moment’s Notice” is another signature ‘Trane piece, enhanced by sideman like Philly Joe Jones and trumpeter Lee Morgan. Blue Train is where the legend of Coltrane truly began taking shape.

As radical and imaginative as the previous records were for their time, both Blue Train and Giant Steps are richly accessible over time, with modest song lengths and instantly memorable melodies. However, straight from the first track, “My Favorite Things” is a 13 minute exercise in modal jazz perfection that you’ll find is not a second too long.

This album may be the definitive record of Coltrane on Soprano saxophone and features the first appearance of his longtime pianist, McCoy Tyner, whose solos make him an equal star of the title song. ‘Trane, as you’ll discover, had an uncanny ability to making cover songs his own, and he molds this classic tune from The Sound of Music into a seminar of swing and blues that Rogers and Hammerstein could never dream up. This record, including a hard-hitting take on Gershwin’s “Summertime,” helped non-jazz music fans take notice of Coltrane and his genius, getting rotation on college radio stations and inspiring rock musicians like The Doors.

Compiling albums out of various non-cohesive sessions was a common practice in jazz in the 1950s and 1960s, and it was no different for Coltrane. Record companies eager to capitalize on his success after expiring contracts spit out many thrown together LPs. The “Order is Everything” series – you’ll find later – is strictly anti-compilation, but this is the best of that bunch and a special exception must be made. All six tracks possess that signature Coltrane tone and blues, but the standouts are the moody “Equinox” and “Central Park West,” which are among his most celebrated compositions.

Four words: “In a Sentimental Mood.” While The Duke and ‘Trane shared top billing for this album, it continued the reoccurring theme of at least one instant standard per Coltrane project. As unparallel as Coltrane was as a tenor saxophonist, Ellington had a way to getting the best out of his collaborators (i.e. Money Jungle with Charles Mingus and Max Roach), and this album sees ‘Trane use a sense of restraint and fluidity that served the songs best; a trait that he would incorporate in future recordings to great effect.

From one famous pairing to another, this album is among the very best when it comes to voice and instrumentalist collaborative albums (see Nancy Wilson with Cannonball Adderley). The juxtaposition of Hartman’s thick, slow moving baritone with Coltrane’s emotional soloing proved both romantic and moving. Although only comprised of ballads like “Lush Life” and “Autumn Serenade,” John Coltrane & Johnny Hartman is quietly dynamic, displaying textures that subliminally melancholy and complex.

It can be argued that this is Coltrane’s best album, and its position at this in the order is curious to say the least. While such an assertion is more than valid, this album, in terms of skills and scope, is a hard pill to shallow for those who are new to his work, therefore explaining its placement here. Coltrane famously battled drug addiction briefly, but his unabashed faith in God made him a new man and this album is direct reflection of that faith. A four part suite, A Love Supreme is the crowning achievement of Coltrane’s eponymous quartet, including Tyner, drummer Elvin Jones and bassist Jimmy Garrison.  It’s free form, melodic, cryptic and redemptive all at once. And if nothing else, “Resolution” will bring you to your knees!

There are a myriad of exquisite live recordings of Coltrane; Live at Village Vanguard, Newport ’63, and Live at the Half Note: One Down, One Up, but the cream of the crop is Live at Birdland. Like the aforementioned albums, Birdland features ‘Trane alongside members of his quartet, once again on soprano sax. Here you’ll get to experience Coltrane on stage, where he was at his most entrancing, engaging and unfiltered.

The LP opener is the definitive version of Mongo Santamaria’s “Afro Blue,” and the studio recording of “Alabama,” his response to the Birmingham church bombing that infamously killed four little girls, is a four dimensional look into the heart of a nation full of hurt, fury and confusion that will stir the souls of all who hear it. His cadenza during “I Want to Talk About You” is a glimpse of Coltrane unaccompanied and at his most raw.

Having navigated the freeways and back alleys of be-bop, hard bop, free jazz and otherwise, you get to behold Coltrane fronting a large ensemble on Africa/Brass. This album is one of great importance due to its inclusion of equally enigmatic saxophonist Eric Dolphy. Together, he and ‘Trane pushed jazz’s traditional envelope with precise abandon.

With a 12 player ensemble, including Jones, trumpeter Freddie Hubbard, and bassist Reggie Workman, Tyner and Dolphy arranged the brass and orchestrated the band respectively, providing primal, yet multifarious backdrops for Coltrane to create lasting impressions on songs like “Greensleeves,” and the title track.

Lastly, the intricate wall of sound of Africa/Brass leads to free jazz of Ascension, Coltrane’s most notorious foray into free jazz.  Once again, he worked with a large cast – 11 musicians – with Hubbard, Tyner, Jones and Garrison returning, Ascension was not as chaotic as Ornette Coleman’s work, but was a continuous session without a track list. Within the faintest sense of structure was the occasion of horn players releasing, rather than playing, taking solos between a collage of random sound, and Jones thundering away possessed power. Fellow tenor player Pharoah Sanders proved to play a crucial role, inspiring ‘Trane to continue on the free jazz path with him for the final two years of his life.

For you completists out there, here are the remaining John Coltrane albums:

* Recommended, but not essential

Hope we were helpful…

Get Off The Fence, the premier music debate podcast, is now four weeks into its relaunch, as a DEF|Y|NE Media production!

Episode 4 original aired in March 2018 and features host and producer Matthew Allen, debating with Scienz of Life rapper and TV host JR Robinson, about which classic Common album is the best: 2000’s Like Water For Chocolate or 2005’s Be.

DEF|Y|NE Media is happy to announce that Get Off The Fence is now also available on Apple Podcasts and Google Podcasts for distribution and downloads. You can subscribe at the RSS site: 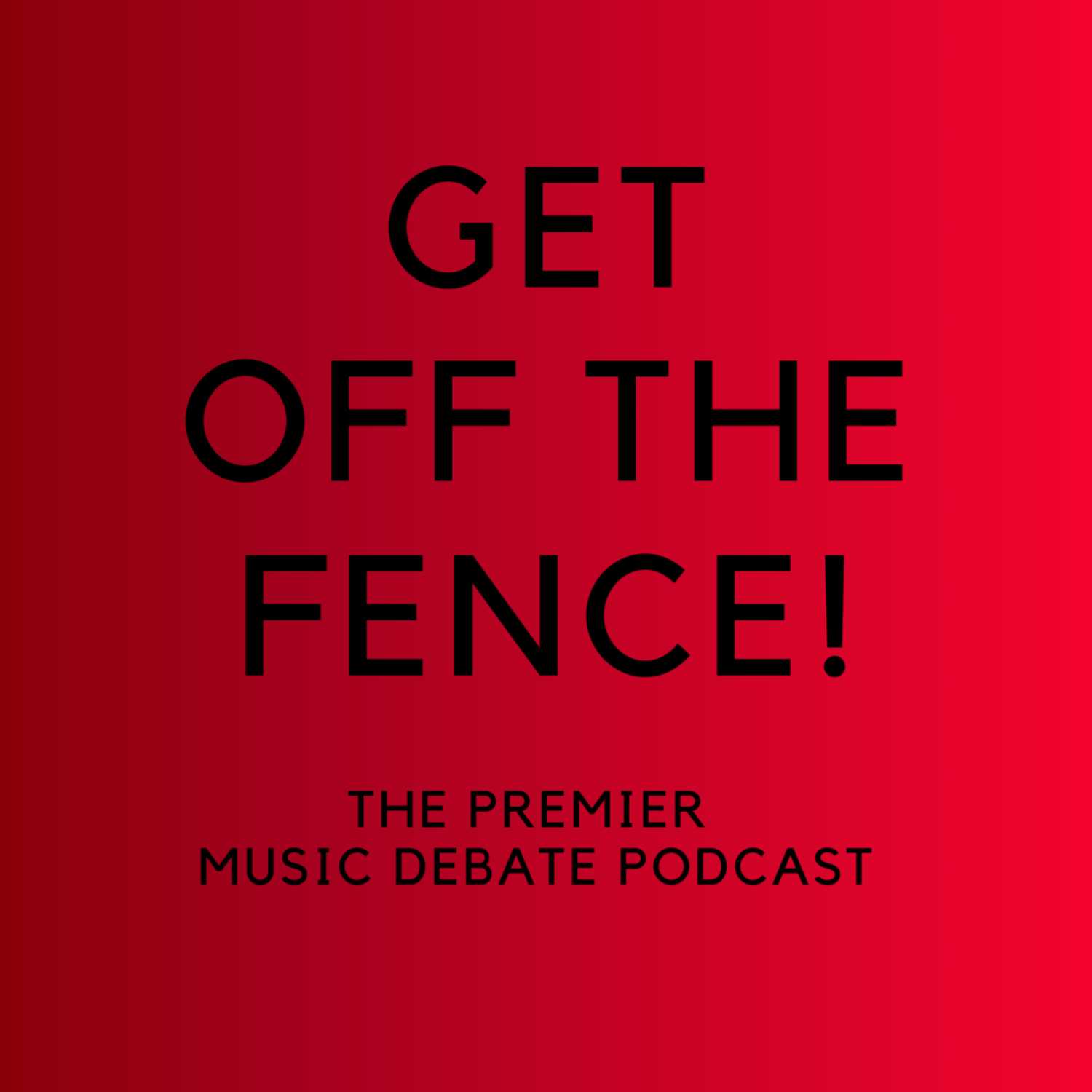 Marvin! I Want You vs. Here, My Dear – Get Off The Fence

Matthew debates with his guest, music scholar Nia I'man Smith, about which of these classic Marvin Gaye albums is better: 1976's "I Want You" or 1978's "Here, My Dear." Matthew is Team I Want You while Nia I'man is Team Here, My Dear. Who'll make the better argument? Listen, leave you comments & subscribe!If you have any suggestions for debate topics, feel free to leave your comments!Also, if you enjoyed the music played during this episode, find it all on this playlist:https://open.spotify.com/playlist/5WFzElAkA7hubx3E6vSkHl?si=6028b47928eb4025"Get Off The Fence" is a production of DEF|Y|NE Media. It is produced, written, hosted & edited by Matthew Allen.

Each week, DEF|Y|NE Media is providing the playlist of all the songs played each episode in our weekly Get Off The Fence Soundtrack on Spotify. Each playlist is curated in the identical order they appear in the episode:

Get Off The Fence, the premier music debate podcast, is now three weeks into its relaunch, as a DEF|Y|NE Media production!

DEF|Y|NE Media is happy to announce that Get Off The Fence is now also available on Apple Podcasts and Google Podcasts for distribution and downloads. You can subscribe at the RSS site:

Marvin! I Want You vs. Here, My Dear – Get Off The Fence

Matthew debates with his guest, music scholar Nia I'man Smith, about which of these classic Marvin Gaye albums is better: 1976's "I Want You" or 1978's "Here, My Dear." Matthew is Team I Want You while Nia I'man is Team Here, My Dear. Who'll make the better argument? Listen, leave you comments & subscribe!If you have any suggestions for debate topics, feel free to leave your comments!Also, if you enjoyed the music played during this episode, find it all on this playlist:https://open.spotify.com/playlist/5WFzElAkA7hubx3E6vSkHl?si=6028b47928eb4025"Get Off The Fence" is a production of DEF|Y|NE Media. It is produced, written, hosted & edited by Matthew Allen.

Each week, DEF|Y|NE Media is providing the playlist of all the songs played each episode in our weekly Get Off The Fence Soundtrack on Spotify. Each playlist is curated in the identical order they appear in the episode: